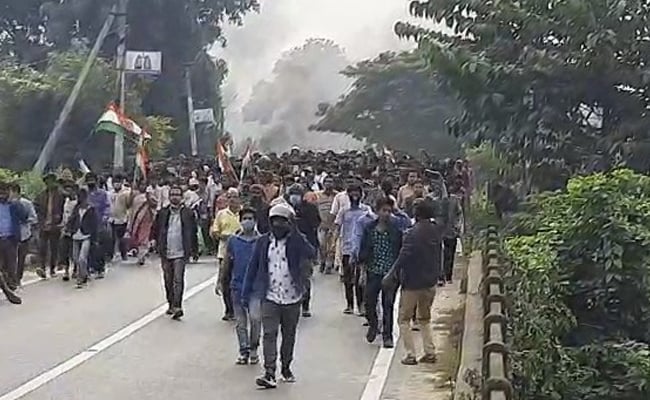 At least one individual died in Tripura in police firing at protestors towards rehabilitation of Bru tribals.

At least one individual was killed and several other others have been injured, 5 significantly, in North Tripura as police opened hearth after a protest allegedly turned violent on Saturday. Reinforcements have been despatched to affected elements of the state.

According to the police, motion was taken after agitators reportedly began pelting stones and blocked National Highway 8 in Panisagar city – 4 hours north of state capital Agartala.

Police sources confirmed to NDTV that 45-years-old Srikanta Das was shot lifeless and 5 others have been significantly injured when police personnel fired at a gaggle of individuals protesting in help of an indefinite bandh, or shutdown, towards rehabilitation of Bru refugees. According to sources, the protestors are mentioned to have additionally attacked police personnel.

Locals sources added that one personnel from the hearth division additionally reportedly died, however the police are but to verify his loss of life.

In view of the violence, an enormous contingent of safety forces, together with troopers of the Tripura State Rifles, has been mobilised in Panisagar and neighbouring Kanchanpur areas which stay tense, police added.

The shutdown – opposing the Central authorities’s choice to rehabilitate round 35,000 tribal Bru refugees from Mizoram again to Tripura – has been in place since November 16. It has stoked stress and crippled regular life.

Since Monday, round 12,000 to fifteen,000 protestors, together with college students, girls and youngsters, have been defying prohibitory orders by organising rallies and demonstrations in entrance of presidency places of work and markets.

The regulation and order scenario deteriorated on Tuesday after a gaggle of tribal refugees attacked 26 non-tribal homes and a gasoline pump on Tuesday night forcing 110 individuals to flee to safer locations, the police mentioned.

Twenty-three years in the past, in October 1997, 1000’s of Bru tribals fled to neighbouring Mizoram after an ethnic battle in Tripura. Their relocation from refugee camps – a pet challenge of Home Minister Amit Shah – was seen as a serious success of the Narendra Modi authorities within the nation’s northeastern states, however the locals are strongly against it.